Location
Arts at the Armory Cafe

Free and open to the public

Tarab Chorus: The Tarab Chorus was founded in 1997 to revive and preserve Classical Arabic music. Tarab seeks to provide a cross-cultural bridge between East and West through the art of music and singing.The group’s primary goals are to preserve the authentic classical art forms of Arabic music and to serve the Arab and American communities of Massachusetts and beyond.Members of Tarab come from all walks of life, and their enthusiasm and dedication over the years has refined and nuanced their singing of Classical forms such as: Al-Mouwashah, Al-Dawr, and Al-Taqtouqa. The time periods covered by the group span from the 10th century through the early 20th century.

Nabil Ata Born in Lebanon and a resident of MA for the past 41 years.Nabil is the energetic founder of Tarab in 1997.He received part of his training at the Beirut Music Conservatory. For over 30 years he has focused his artistic energy on preserving and reviving classical forms of Arabic singing such as Al-Mouwashahat and Al-Dawr 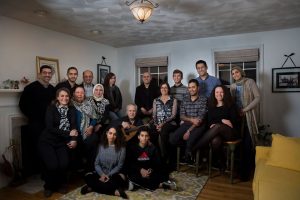