With live score by The National Arab Orchestra (NAO) 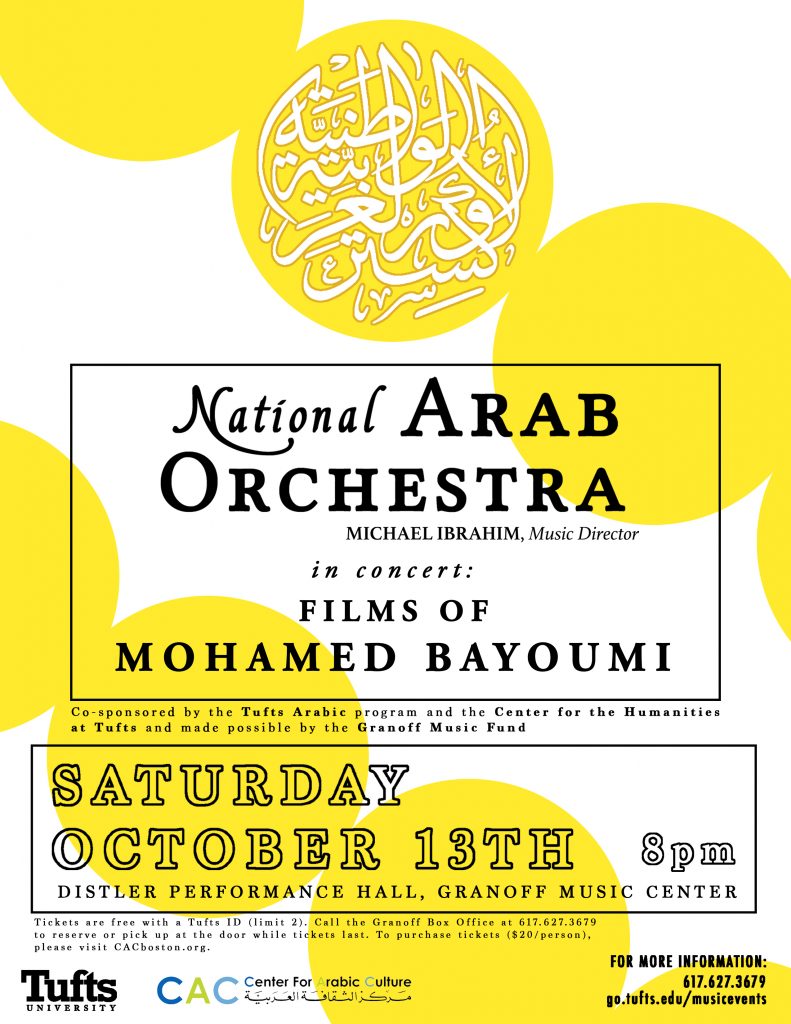 The National Arab Orchestra (NAO) will perform an original score written by NAO founder/director Michael Ibrahim. This specially commissioned performance by the NAO will be paired live with screenings of rarely-seen silent films from the 1920s and 1930s by pioneering Egyptian director Mohamed Bayoumi. This event will include a discussion by Egyptian history and film scholar Mohannad Ghawanmeh.

The concert is part of a 2 day music symposium at Tufts university, where NAO musicians will meet local musicians and music students, share their vision, and hold workshops.

The Music Symposium and Concert are in collaboration with the Arab Music Ensemble and Arabic Language Program at Tufts university. This event has been made possible by the Granoff Music Fund and is co-sponsored by the Center for the Humanities at Tufts.

This special film screening is made possible by the National Performance Network (NPN) Creation Fund Project that has been co-commissioned by the Arab American National Museum (AANM), the City of Chicago/DCASE and NPN, in partnership with the National Arab Orchestra, with additional support from Detroit Institute of Arts.

Tickets are $20/ person and free with Tufts ID.

The first workshop will be held on October 12th at Granoff Music Center.

Mohamed Bayoumi is a pioneer of Egyptian cinema; the first to create newsreels in Egypt, an early designer of innovative camera equipment and the founder of the first Egyptian film studio. Bayoumi was born in 1894 to a family of cotton merchants in Tanta, a city on the Egyptian Delta. As a child he drew, took photos and repaired clocks. As a young man Bayoumi participated in the Egyptian independence movement, witnessed the decline of British rule and the emergence of Egypt as a cosmopolitan society with expatriate communities in Europe.

Michael Ibrahim and the National Arab Orchestra:
Michael Ibrahim is the composer of the score and one of the most innovative artists to emerge on the Arab American music circuit. Born in Detroit to Syrian immigrants, he has studied with Simon Shaheen, Johnny Sarweh and Nadim Dlaikan. He holds a bachelor’s degree in music from Eastern Michigan University and an MA in conducting from Wayne State University. His unique approach to composition and improvisation has led to recordings and film score projects. Ibrahim is also an active music educator who teaches, lectures and demonstrates Arabic music. He founded the National Arab Orchestra in 2009. The musicians of the National Arab Orchestra are dedicated to creating memorable experiences through education, cultural outreach and performance, with emphasis on the musical traditions of the Arab World. The NAO is home to the Orchestra, the NAO Takht Ensemble (the format for which this score was written), and the NAO Community Choir.

Mohannad Ghawanmeh:
Mohannad Ghawanmeh is a film scholar and cineaste. He has produced, acted in, curated for, written about and lectured on film. His expertise is centered on Arab cinema, but extends into silent, non-fiction, transnational and religious cinema. A PhD candidate in Cinema and Media Studies at UCLA, Ghawanmeh is recipient of the Teshome Gabriel Memorial Award and the Dr. Jack Shaheen Memorial Scholarship, among others. He is a 2017-18 fellow at the American Research Center in Egypt. His dissertation investigates the political economy of silent cinema in Egypt, 1896–1932.

The Center for Arabic Culture (CAC) is a non profit organization dedicated to Celebrating the Arabic culture and the Arab- American experience through education and the arts.

Through “Building Bridges and Connecting Cultures”, the mission of (CAC) is to raise awareness about the Arabic Culture in an open democratic and inclusive way.