CAC is proud to partner with talented and excellent musicians to hold Arabic and Middle Eastern music workshops! These intensive workshops feature a rigorous program of improvisation, rhythm, ornamentation, and ensemble. If you are interested in participating or would like to learn more please email us at info@cacboston.org

Free to the Public

Basel Zayed at a music workshop-
The art of Arabic and Middle Eastern melodic improvisation
(Al-Taqaseem)
All instrumentalists and singers are welcome, and no prior knowledge of Arabic and Middle Eastern music is necessary.
If you have an instrument, please tune it prior to the start of the workshop.
Saturday May 7, 2022 @ 6 to 8 pm
Address: Arts At the Armory
191 Highland Ave. B5 Somerville, Ma 02143
Entry fee $20 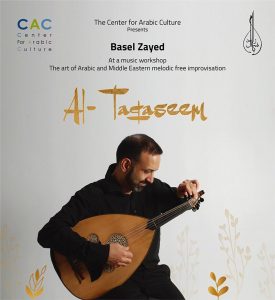 Basel Zayed is a virtuoso oud player and an acclaimed vocalist skilled in classical and contemporary Arabic music. He draws on deep experience with the Maqam (Arabic) music tradition to explore the beauty and universality of Middle Eastern music, especially when combined with other musical styles, such as jazz. Basel is also a trained pianist and skilled musical arranger. He has composed and arranged music for several successful artistic projects and performing groups. He also creates and records original soundtracks for movies, plays, and dance troupes.
Basel began his music career as a composer, vocalist, and professional oud artist, and has developed a reputation as successful musical leader and conductor. He has performed at many international music venues in various roles—featured artist, bandleader, conductor—in Sweden, Italy, France, Spain, Denmark, Lebanon, UK, US, Jordan, Egypt, and Palestine.
In addition, Basel is an experienced music educator with a background music therapy. He holds a master’s degree from the Guildhall School of Music and Drama at City University of London. He lives in Massachusetts with his wife and two children, where he works as an artist, clinician, and educator.

Bassam Saba of Lebanon is a world-renowned virtuoso, multi-instrumentalist, and leading figure of Arabic music. Saba studied nay, ‘ud and violin at the Lebanon National Conservatory. He received his BA in Western Classical Music and Flute Performance at the Conservatoire Municipal des Gobelins in Paris, and Masters in Western Flute Performance and Music Education from the Gnessin Musical Pedagogical Institute in Moscow. Saba has toured extensively with diva of the Arab World, Fairouz, as well as Marcel Khalife, Simon Shaheen and Ziad Rahbani.

He has collaborated with classical and pop stars such as Yo-Yo Ma, Sting, Alicia Keys and Santana, and jazz icons such as Herbie Hancock and Quincy Jones. Saba, one of the most sought-after teachers of Arabic music, co-founded and directs the New York Arabic Orchestra. Saba has been invited to perform as a soloist for the Hanover Philharmonic, Qatar Philharmonic, Beirut Philharmonic, Zurich Orchestra and East Oakland Bay Symphony, among others.