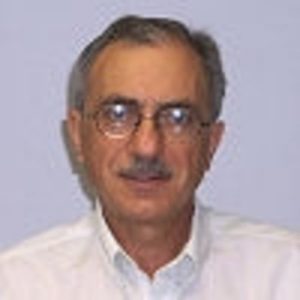 Munir Jirmanus was born in Jerusalem to parents who had immigrated to Palestine from Lebanon. In 1948 his parents lost their house & land as part of the ethnic cleansing of Palestine and ended up going to Lebanon to start a new life. Munir graduated from the American University of Beirut (AUB) in 1964 with a B.S. in Physics, and with an M.S. in Theoretical Physics from Tufts University in 1966. He subsequently went back to Lebanon and taught at the Lebanese University, then came back to Tufts where he received a Ph.D. in Experimental Physics in 1973. After brief teaching stints at Tufts University and AUB, he joined Janis Research Company, one of the world leaders in designing & supplying cryogenic equipment to the Low Temperature Physics research community. He is currently Vice President and Technical Director responsible for developing new products for Laboratory Cryogenics at Janis.Munir is married to Naila Saba who also graduated with physics degrees from AUB (B.S. 1968) and Tufts (Ph.D. 1973). They have two daughters who were born and educated in public schools and private universities in Massachusetts, and they both have very strong connections to Lebanon & Palestine. Munir & Naila have had a long history of involvement in Peace & Justice issues in the Arab American community in Boston, first as students and subsequently after they returned to Boston in 1978. They have organized local & regional educational conferences about Palestine / Israel for the Presbyterian Church USA, and for Sabeel, where Munir is co-chair of the New England chapter. They have also worked on the campaigns of several local and national politicians and are members of the Massachusetts Peace Action, the Boston Alliance for Water Justice, the local BDS movement and work closely with Jewish Voice for Peace in Boston