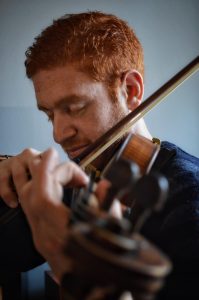 Layth Sidiq is an award-winning violinist, composer and educator and the current artistic director of the New York Arabic Orchestra and the Center for Arabic Culture's Youth Orchestra Program. He has toured the world and shared the stage with major artists such as Simon Shaheen, Danilo Perez, and Jack Dejohnette, as well as performing in prestigious venues like the London Jazz Festival, Boston Symphony Hall, WOMEX Expo, Panama Jazz Festival and more. He is featured on multiple award-winning albums and his first record Son of Tigris was premiered at the Montreal Jazz Festival in 2016.

In 2018, Layth won 2nd place at the Seifert International Jazz Violin Competition as the first Arab to ever participate, and he was also recently awarded 'Best International Artist' at the 2020 Boston Music Awards. He also directs the Center for Arabic Culture's Youth Orchestra Program in Boston and was a faculty member at Carnegie Hall’s ‘Music Educators Workshop’. Layth is lead vocalist and violinist for the new Assassin’s Creed game ‘Mirage’, which will be released in 2023.