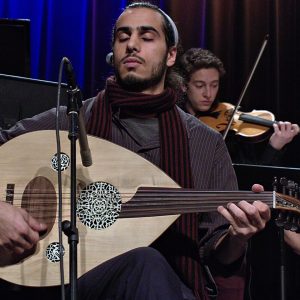 He joined the Edward Said National Conservatory of Music in Palestine in 2003 to begin his journey with the Oud. Eight years later, he co-founded the ‘Bil3aX’ band for contemporary and alternative music.

In 2017, Sawalhi graduated with honours from the esteemed Berklee College of Music with a bachelors of Music Production and Engineering. In 2019 he created the persona of El Ärkitekt; an Arabic rapper/writer & singer/songwriter that focused in the beginning on tackling social and political issues of the Arab world. It later evolved to include more personal and generally relatable subjects.

In 2020, Sawalhi was hosted by TedX Talks to speak about "The evolution of the Arabic music through the 20th century under microscope".